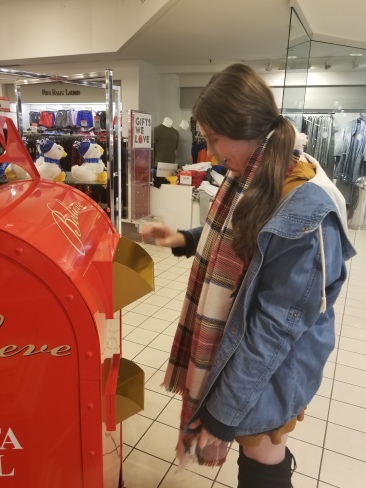 One thing I want my Blogmas series to be is honest. So, to be honest, I originally wrote this blog to talk about a concert my friend and I were hosting at work to get money for Toys for Tots, but due to some unforeseen circumstances, we canceled it. However, I don’t think canceling a concert is a good enough reason to not give to Toys for Tots.

I also think I caught the charity bug because I’m looking for every little thing I could possibly do to give whatever I can this. I think it is because this year has been filled with so much pain and negativity, I feel like I have to give back.

So far, I have helped gather a few donations from friends to give to Toys for Tots, wrote 2 letters for the Macy’s believe campaign (which you can also do here) because I think it is a super simple way to give and spread joy even if you don’t have the money to do so yourself!

I’ve also been looking into some companies that sell goods in which all or a portion of proceeds go to causes. Here is a list of some ones I’ve found that I plan to check out myself! I think it would be a really cute gift idea to give someone a gift that gives back because it’s double the giving and the recipient of your gift also gets to feel as though they contributed to giving back and raising awareness!

I know this is my second post about giving this season, but I really want to drive the point home that giving is something that could do so much for the world we live in!

What are you doing to give back this holiday season?!

6 thoughts on “A Little Bit of Charity- Blogmas Day 10”

Trying to get my head back in the game after a couple of rough weeks🌥 | Today I posted a blog post about being sad and the things I've realized about sadness from the people in my life and from books that I've read. Sadness is such a complicated emotion because it's self-created but we assign it external sources to avoid acknowledging our role in creating our own sadness. The truth is, inner peace is found when we stop waiting for things to improve and accepting them as they are now. I'm not great at that but I'm willing to try💛
Let's pretend I'm in Disney and not sitting on the couch being a blob for the 40th day in a row🐭🏰
I need an ice cream cone and a 2 week long vacation🍦
I've always been introspective to a fault💭 | I spend a lot of time thinking about myself and the reason I think things and feel things in the way I do and, although I think being introspective is a good practice, sometimes I become introspective to the point of putting myself down. You see, I think one should be introspective in a constructive way and use what they discover about themselves to grow and improve. However, I find it really easy to overstep the line between being constructive and being self-critical. So I am going to try to make it a practice of mine to be introspective but exclusively constructive, not destructive. If I'm going to spend so much time in my own head, why not make it a fun place to be? 🌻💕
Happy Sunday! 🌿 | Where is the next place you plan to travel when you have the opportunity? I think I have my sights set on New Orleans, Florida, or back home to New York (only when it's safe, of course)
Wishing my pale hotdogs and I were laying out at a resort somewhere instead of laying on the couch like a blob for the 1000th day in a row🏖🙄 | I've been experiencing such mental blocks about how I want to pass the time lately. I occasionally feel motivated to do something but, when it comes down to picking something to do, I always come up empty. I brought myself some books to read but never get tempted to pick them up. My yoga mat is nestled in the corner under the counter and I stare at it from time to time, but I can bright myself to do that either. Sometimes I write, but I either struggle to start or lose steam halfway through what would be an awesome blog post. Recently, all I've really been motivated to do is take walks, which is great, but I wish I could convince myself that there is more I could be doing to fill my time. | 🌤 how are you filling your time these days?
Life's turned on its head right now and so am I!🙃 | I think now is as good a time as any to change up your perspective! Instead of thinking of what you currently lack, think of what you have the fortunate opportunity to gain. Instead of fixating on all the things you can't do right now, think of all the times you still get to enjoy each day. Life may feel bad, but there are more silver linings than you think.🌤 I need to work on changing my mindset to start inviting in more good. | what is your favorite positive quote at the moment?
Things I'm missing right now~ •beaches🏖 •bookstores📚 •coffee shops☕ •going to Target for no reason💸 •eating in restaurants🍽 What are you missing right now?
Happy (Jessof)Earth Day!🌎 | Taking this moment to reflect on how I'm doing my part to keep my planet happy and healthy! Remember to love your Mama Earth and do what you can to live more sustainably. Every small step counts! How do you plan to live a more sustainable lifestyle?