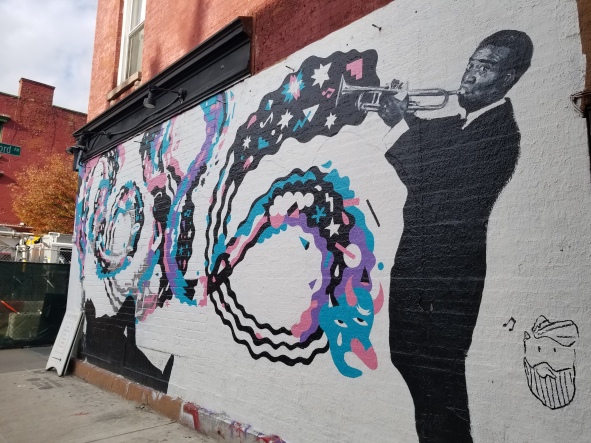 You don’t have to go far from home to discover something new!

The main reason I went to Brooklyn was to go to a concert for an artist named Poppy with my best friend. If you are unfamiliar with Poppy, she is a YouTube pop star that satires the world of pop music in this bubble-gum-cult kind of way. If you’re into weird, quirky stuff I’d recommend you check her out.

We started our day around noon when we caught the train into Penn Station, which is about an hour trip from my stop. Every time I take the train, I am reminded why I dread the idea of being a commuter into Manhattan and why I try so hard to find work on Long Island instead so I don’t ruin the fun and leisure of going to the city.

We got into Penn a little after 1PM and then we hopped on a couple of subway lines to spit us out right around the Williamsburg. I love Williamsburg because it is essential the home of hipster trash and I mean this in the best way possible. Dozens of weird shops, restaurants, coffee shops and more, dressed in walls of painted murals.

The wall art of Brooklyn has to be one of the most enticing parts about it to me really. I love seeing walls covered in words and art and ideas. I even got to see a man painting a huge mural for Sia’s new Christmas music! It was astounding to see how someone could just stare at a picture and create this majorly huge scale art piece. 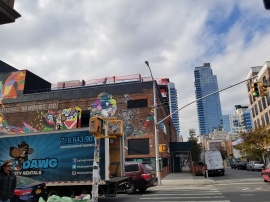 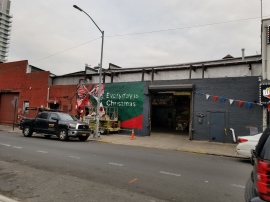 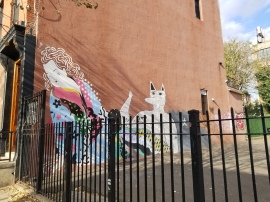 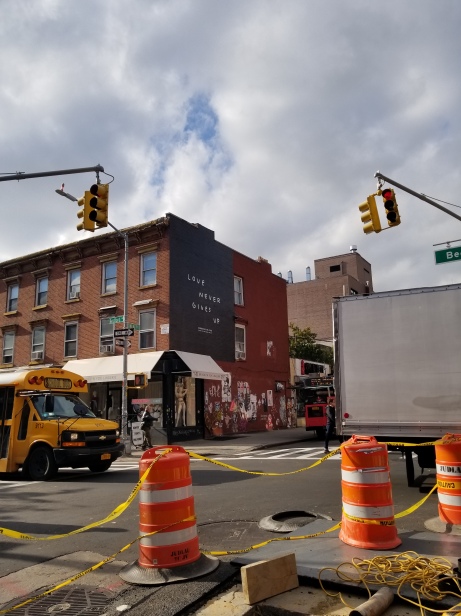 My pictures really don’t do the art any justice, but I hate stopping on the sidewalk too much whenever I’m in the city because it really does get in the way. However, I do think the shots I did get give you a pretty good idea as to the variety of art styles you can see while wandering the streets of Brooklyn.

For lunch, my friend and I stopped at Umami Burger. I know it is a chain and that we could have gone to a local place, but I have actually wanted to try it so we went there anyway (plus if need be, they accepted credit which many local places in Brooklyn don’t). I got the manly burger which was amazing, but I also think it was so amazing because I was absolutely starving. The environment of the restaurant was very cute and Brooklyn and the staff was super friendly (especially because it was dead on a Wednesday afternoon). 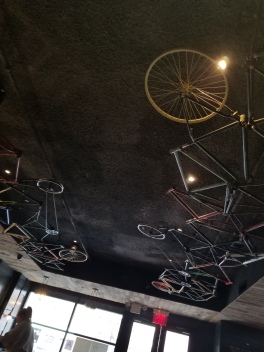 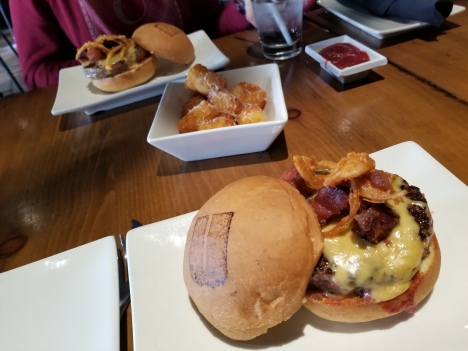 After we finished eating, we decided to walk around to work off the food and to see the sights. I suggested we stop off at a local record and bookstore that we had been to once before for a concert, but never got to explore. It is called Rough Trade NYC and I love the appeal of the store. 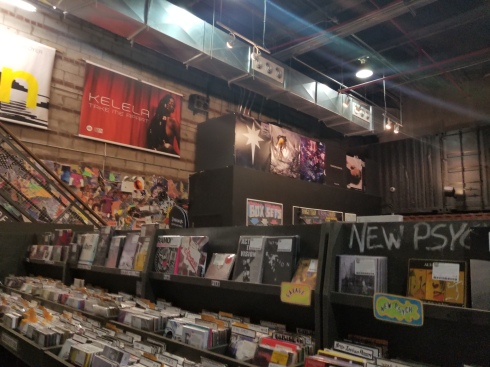 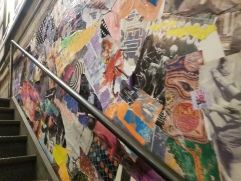 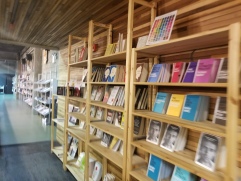 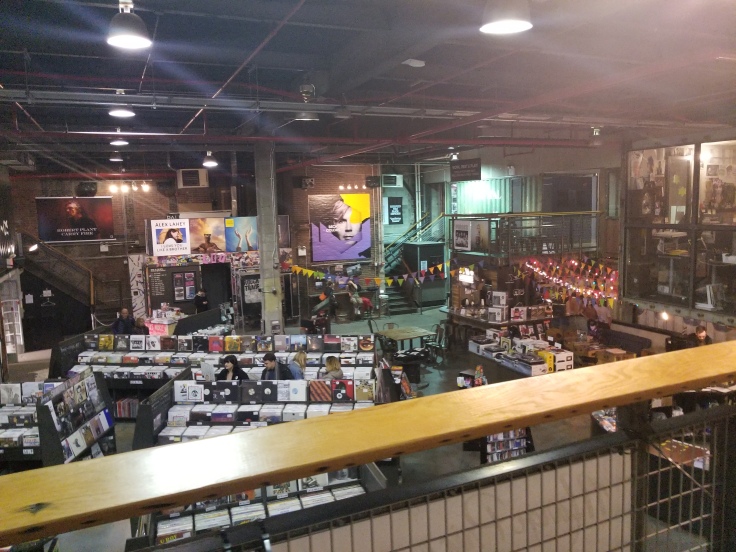 I didn’t end up buying anything (mostly because I couldn’t since i had the concert in the evening), but I had a blast flipping through quirky books like “Things White People Like” and books about the types of hipsters that exist, as well as some more serious books about race rights, female rights, the lives of great artists, musicians, activists, and protesters.

Whenever I go into a CD or record store, I always realize how many artists exist that I’ve never even heard of and all of the weird in between genres of music that I never knew existed. It really inspires me to broaden my music tastes.

After we finished up at Rough Trade, my friend and I took a stroll down the block to the Williamsburg waterfront. The waterfront is absolutely gorgeous, even on a slightly overcast day like the day I went. You get such a beautiful view of the city skyline and you’re right along the water which adds to the pretty scenery. 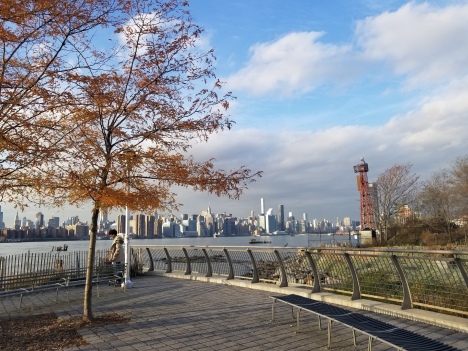 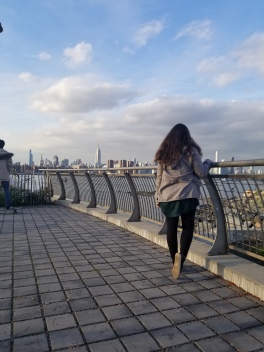 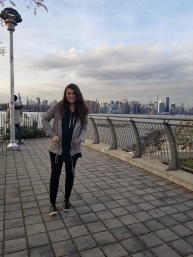 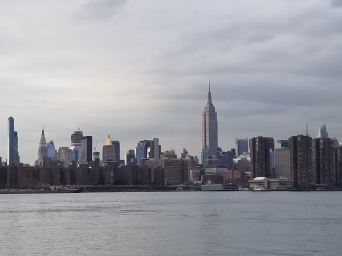 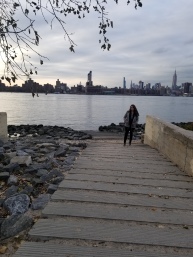 We spent about an hour by the water staring at cute dogs, swinging on the swings, and walking around admiring the view. Then we got cold and decided to hang out at the closest Starbucks. We passed a few coffee shops earlier in the day, but were reluctant to go back because some closed early in the day and others were more sit-down in nature when we really wanted a casual grab and go. Plus Starbucks is always a safe bet for me because I don’t like coffee and I know they have other things I do enjoy there.

We spent about 3 hours in the Starbucks sitting and talk about anything from work to our lives to memories from our childhood. We also got to watch an unconscious man get dragged out of the building on gurney after falling asleep (passing out) for over 3 hours without being able to be woken up….so that was an interesting part of the day.

We left Starbucks around 6:50 to go to the concert at Music Hall of Williamburg which had a doors open time of 7PM. Despite getting to the venue right as the doors were opening, we got a pretty great spot on the side on this elevated section of floor by a railing so no one could block us (my friend is under 5 feet tall so any place she won’t get blocked is great). 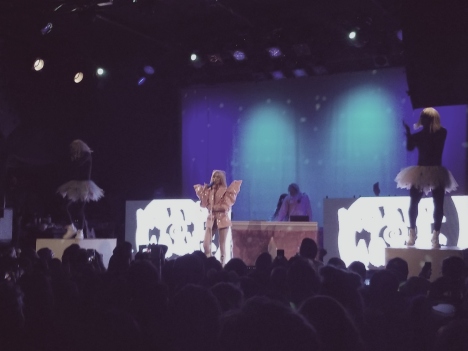 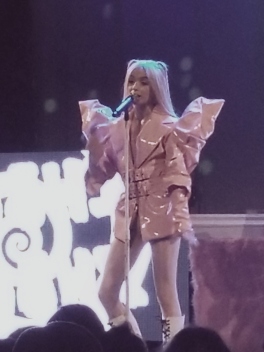 The concert was amazing and Poppy performed most of her new album and her opener was a mannequin named Charlotte Quinn (like a said, very quirky, very fun). The whole concert was a mix of fun music and fun little interludes of clips from her videos as well as some references to old cult culture. My friend and I had a blast and we were also thrilled that the concert wasn’t too long because we were able to grab a 10:02PM train home which is almost unheard of from my experiences going to concerts in every corner of the city.

Overall, I enjoyed my short trip to Brooklyn and would love to go back and explore more extensively sometime. I find that this day trip is proof that even when you’re close to home, it is okay to be a tourist anywhere.

Until next time, wish you were here~

You are not going to know the right answer every time❤️‍🩹
You are more🦋
I'm Jess. I have a dog named Olive and a boyfriend named Vincent. I grew up in New York but I live in North Carolina now and the view isn't half bad. My favorite color is yellow and that's one of the reasons that Fall is my favorite season, especially right when the leaves change.
You create the standard🌿
Recovery isn't linear🦋
When you remove absolutes from the equation, you make so much more possible🌿
What are you working to attract?🌿
You'll always find your way back home🏙
We are the average of the five people we spend the most time with ~ Jim Rohn