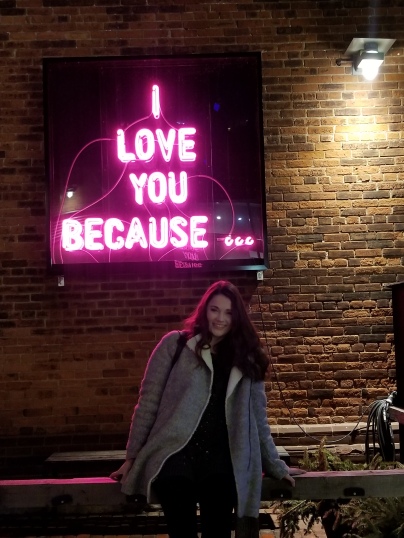 Where I am now, where I am going, and where I hope to be~

I have officially been 24 for one full week and a lot has happened to ring in the new trip around the sun. For one, my friends threw me a surprise party last weekend which was really nice and I am still gushing with appreciation for how nice a gesture that was. Secondly, a job I really want in my new home state has just requested a third interview with me which is incredibly exciting because finding a job for after I move has been something weighing super heavily on my mind. And, to create a bit of balance into the mix, I also think I am being ghosted which, at this point, is sort of just funny to me.

Life at 24 is definitely not what I ever pictured it to be. When I was a kid, I expected to be engaged by 24 or 25 and married by 27. Now, at 24, I hope to be married at some point and have my life together when possible. Strict time expectations have sort of gone out the window, even though sometimes I try to revive the practice and convince myself that I know, for sure, when things will fall into place.

So, where am I right now at 24? I am living in New York, I am single, I am working my first “real” job at a performing arts center doing social media, I live at home with my parents, and I am relatively content. I say relatively content because I wouldn’t say I am beaming about where I am in life right now. I am just comfortable to be where I am and hope to go further in life after the necessary changes take place.

I know I made a post about change relatively recently and numerous times prior to that one, but it is just something that weighs so heavy on my mind. I think it may be because I am an introvert that change stresses me out so much. The amount of socialization that goes into change can be super stressful and exhausting and, being the kind of person who always tries to make the best first impression, only makes me more exhausted.

I am hoping the trend of 24 is emotional and spiritual growth. You see, I feel like lately, I am beginning to see things for what they are. I have been incorporating positive self-talk into conversations with myself where I feel as though I must be the bad guy based on how certain people treat me. With my move right around the corner, I sort of realized that if someone is making me feel bad, they aren’t worth my time and they won’t be worth keeping up with when I do leave.

I feel like 24 is the year where I separate the real and the fake from my life. I think it will be a wake up call in a lot of areas of my life and will alert me to toxic people and things that have been stunting my growth. The move is going to break my routine and, thus, break a lot of cycles I had put into motion that have really held me back from becoming the best version of myself.

That isn’t to say that I know for sure that the move will be overwhelmingly positive and that I won’t end up moving back to New York in a year or two. But it is to say that this move will be the bulk of my 24. It is going to be a shock to the system that is really going to teach me a lot and, although there will be some discomfort, sadness, and growing pains involved, I think that what I will get out of it will be for the best.

So, we have covered where I am and where I am going…so now on to where I hope to be. By 25, I would love to see myself in a job that make me happy, or at least content enough that I can continue doing it while reaping the benefits of stronger financial stability and experience building. I would also love to be living on my own or on the path to living on my own. In terms of my relationship status, I would be okay with still be single, but if I meet anyone super cool then I would probably be more than happy to be in a relationship if the other factors in my life permit.

Most of all, I want to make the shift from content to happy about my life.  I want to be able to look at the life I have been working to build for myself and feel as though I have accomplished the first steps of what I would like to accomplish. There is so so much I want to do with my life, so to see steps being made is what it would take to push me into a place of happiness and excitement with my life.

24 will also be a year of blogging my journey and anything else that inspires me, because I never want this corner of the internet to stop being a place I can go to just be me.