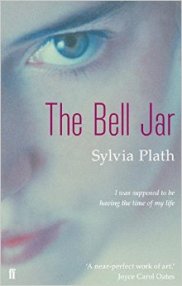 So I am making an attempt at a new personal project this year where I try to read at least one book a month in order to expand my mind (I know I said I wouldn’t make a resolution, but this is more of a loose personal project). This month was The Bell Jar by Sylvia Plath.

I started out with The Bell Jar because I had purchased an old 1980’s copy from a resale book shop (with the cover on the far left) back in August and I had every intention of reading it when I found, what I felt to be, the correct time in my life to read it.

I kind of want to start out talking about something that does not have anything to do with the content of the book: The cover.

Upon searching for the cover of my particular copy, I was surprised to see how many covers there were for this book. I pictured four above but I found quite a few more. Each cover sets a completely different tone in my opinion which I find to be quite interesting. I actually feel the far right cover is the one that most accurately fits the mood of the novel in my eyes, a hazy nostalgia.

Anyway, I had chosen January to read this novel because I started this year in a rather dark place, emotionally and mentally, and felt as though reading this would help me feel as though I had someone that related to me on some level. That being said, I guess I will give you the run down of the plot and what I enjoyed about the novel and what I did not, as well as other general comments I have pertaining to what I got out of it.

The novel follows Esther Greenwood, a 19 year old girl, as she battles with the pressures of being a woman in the mid 1950’s and a mental illness that is not widely understood in its time. Esther finds herself confronted with issues such as purity, the role of women in society, fertility and children, marriage, her writing pursuits, sexuality and, most of all, depression.

At the start of the story, Esther is taking part in a one month scholarship intern program in New York City where she is living the highest life the city has to offer. From the start, we can tell that Esther finds the whole thing a bit superficial and talks about her closest friend there, Doreen, who also is disenchanted by the whole situation and humors Esther with her dry sense of humor and willingness to deviate from the set plans.

Esther is not as blunt and outgoing as Doreen and as a result, spends a lot of their outings within her own head. This is actually a theme across the novel, isolation within one’s head. Esther spends a majority of her time in the novel not speaking any real dialogue, but instead, removing herself from moments she did not find particularly stimulating to recount things from her past.

Her internal dialogue was something that I found particularly interesting and well done about the novel. To any person with no experience with mental illness, this book just seems like 200 pages of a girl rambling about her life then being institutionalized. But, if you pay close attention, you start to notice trends in how she speaks and engages with people as well as how she tells stories in her own head. In many of the chapters, she starts at either a tranquil high point or an incredible low point and as the chapter progresses her tone entirely shifts. Aside from the highs and lows, she also gets incredibly lost in her stories and will jump through multiple timelines during one story. Her disorganized thoughts, attention to detail, and inability to control her emotions made it clear early on that she was going through something within herself that wasn’t being directly addressed.

As she explores the city and goes through her day to day tasks, she begins to reveal many things about herself and her past that show exactly how much pressure she was under. For one thing, she discussed her pressures to succeed in school and her ambitions to be a writer and to get into an exclusive writing class upon her return home from the internship. She was also incredibly stressed by how oppressed she felt as a female of her time and how she felt pressured to married the guy she had been dating even though she was disgusted by the fact that he had not saved himself and was not pure. She internalized this and spent much of her time trying to find ways to rid herself of her purity as a means of getting back at him.

Overall, Plath was able to address multiple concerns of women of her time and kept them well organized, showcasing each to the fullest of her ability while not losing any in the midst of larger conflicts. Juggling all these different concerns throughout the book became all the more symbolic because it showcased how much pressure everything piling up is putting on Esther.

To avoid spoilers, I am going to skip any big, juicy details and just move on to the fact that after the internship she returned to her hometown to spend her first summer home in years. Her growing depression begun to interfere with her ability to perform everyday activities such as eating, sleeping, writing, and reading, which took a toll on her emotionally because, as an aspiring writer, the ability to read and write and feel inspired is vital to her entire livelihood.

I don’t really want to go into anymore detail as to not put too many spoilers out there if you stumble across this post (all zero people who read this), but in short, we learn that mental health was not handled adequately in that time period and the way it was handled often resulted in more issues and mistrust to the system and people as a whole.

To wrap this all up, I loved the novel and what Sylvia Plath used it to say. I loved the tone and the flow of the story and got attached to Esther and sided with her whether she was acting morally and appropriately or not because I felt for her. If I could pick out anything I didn’t enjoy, it would be that sometimes I felt like I would get lost in the multiple fragmented timelines or unable to picture certain scenes in my head as they were described. But, overall, I definitely can see why this is one peoples’ “must read” list because it was definitely a very telling story about how different things used to be in terms of how we handled mental health.

Thank you Sylvia Plath, I am so sorry for how you suffered, but I am incredibly grateful for your art. Truly a feminist icon beyond her time.

I'm Jess. I have a dog named Olive and a boyfriend named Vincent. I grew up in New York but I live in North Carolina now and the view isn't half bad. My favorite color is yellow and that's one of the reasons that Fall is my favorite season, especially right when the leaves change.
You create the standard🌿
Recovery isn't linear🦋
When you remove absolutes from the equation, you make so much more possible🌿
What are you working to attract?🌿
You'll always find your way back home🏙
We are the average of the five people we spend the most time with ~ Jim Rohn
Learning to love yourself is a daily practice💛
You hit rock bottom when you finally decide to stop digging.